A couple of weekends ago we were embroiled in a hard hitting ringette tournament out of town in quaint Stonewall, Manitoba.  So named because they have much stone.  And walls.

Two aspects of that weekend stuck with me photographically.  As did the frost to my eyelids as it was uncharacteristically brisk that weekend.  And that was just inside the arena.  The aptly named Ice Palace.  Were it not for the pitched heat of battle on the ice we probably wouldn't have made it out of there.  But I was inspired to return to shoot this passage underneath the stands.  Cold, hard concrete that was all about perspective and high dynamic range imaging. 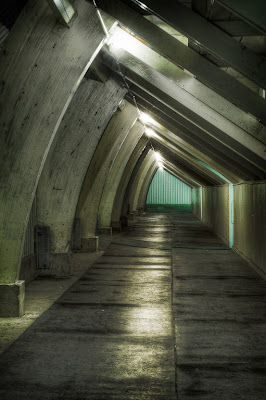 As for the rest of the arena?  Best left unsaid.

Also of interest were these two stone towers.  Part of the town's overall "stoney" palette.  These were also shot in HDR to get as much detail and texture as possible.  There are still bits of skin on my camera and tripod from that one as it really was cold out that early evening. 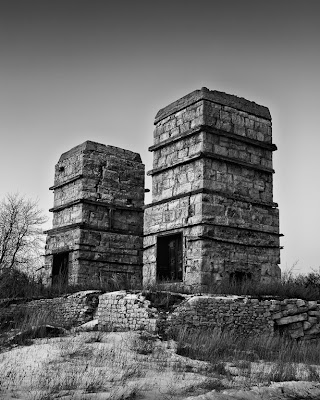 Was an overall good weekend despite the travel and the temperatures.  Girls got bronze, and I got some interesting frames.  Along with some ideas for a future trip armed with some serious neutral density and time on my hands.

City Center in Las Vegas is fairly spectacular.  Encompassing God Knows How Many square blocks it's nestled between the Bellagio and Monte Carlo.  Home to hotels, casinos, shopping, commercial space, and condos/apartments it's truly a sight to behold.

And an absolute playground for a photographer with an interest in shooting any type of architecture.  Had a couple of posts from the Aria earlier with this in mind.

Still making my way through photos from the trip.  These are some more that stood out for me with hopefully others to come. 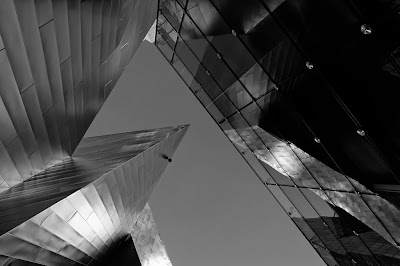 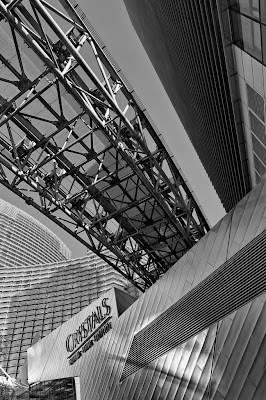 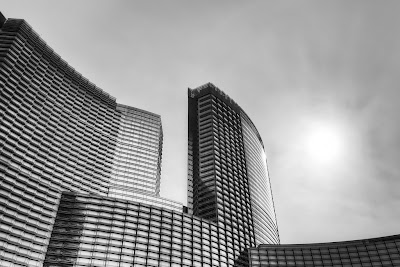 The view from the Bellagio when we first arrived.  Beautiful sunset and sky.  Believe it or not the colors aren't overly juiced here - they really were this vivid. 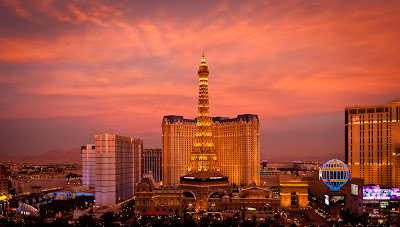 Waking Up in Vegas

Trying to pick at my photos from our trip to Las Vegas last month.  So behind.  This is an HDR shot from our Window early in the morning.  Blended from three different exposures, with my lens jammed tight against the glass, the scene looks little different than it would early evening.  Nobody EVER shuts the lights off in that town.

This is looking out from the Bellagio over their "lake" and across the street at Paris. 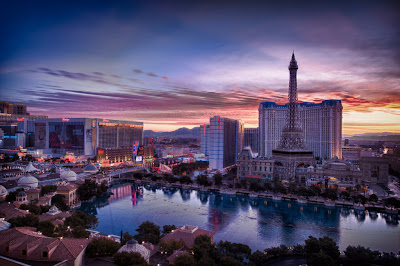 Killing time waiting for next tourney game, but no camera this time and great lines at the arena. iPhone and Nik's Snapseed to the rescue. 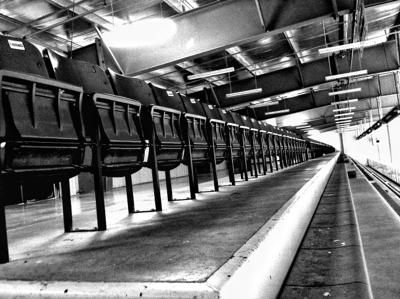 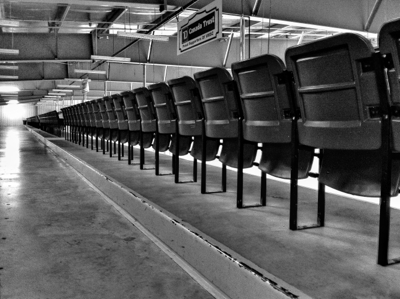 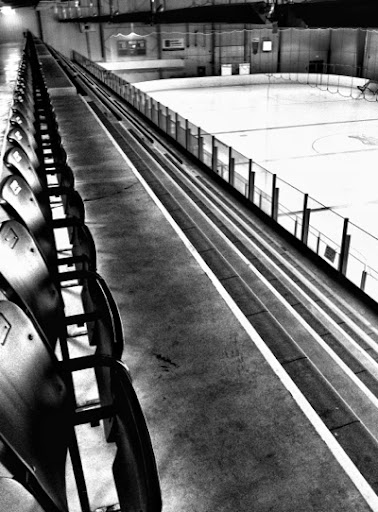 Another Day, Another Arena

Another chilly, early morning at the rink. And an older one that apparently offers little respite from the cold outside. 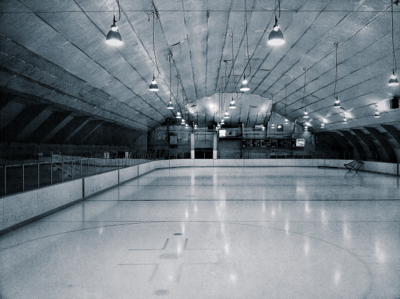 I have no problems with it so long as it's sunny.  Cloudy winters?  Pass.  Rainy winters?  Buh-bye.  Give me a clear, blue, crisp sunny winter day.  And where there is hoar frost as part of the equation all the better.  Had one of those today. 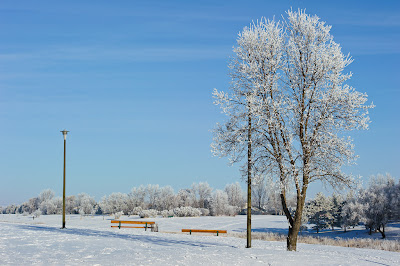 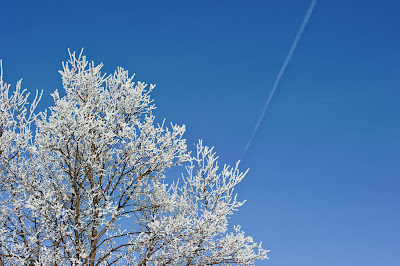 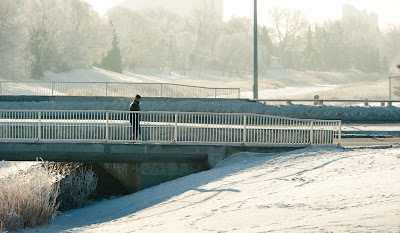 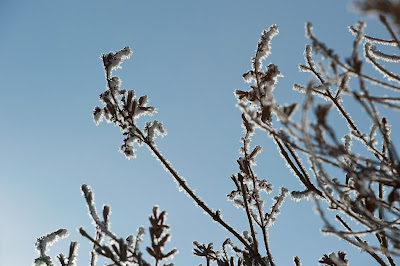 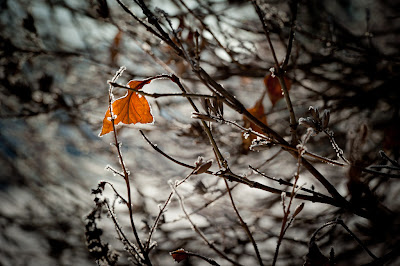 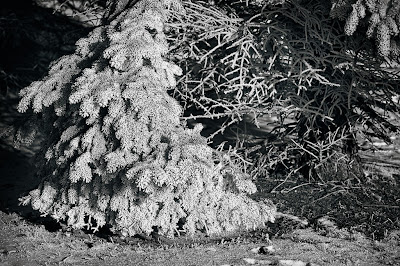 Foggy all day here.  And, being Thursday, I'm on garbage/recycling duty.  And so as I walk outside I can't help but notice how nice the glow from overhead streetlamp looks backlighting our frosted tree.

Had to grab the rig and take a few frames, knowing they were destined for B&W. 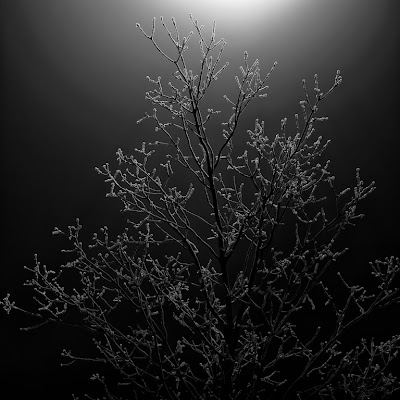 Poking around the Blogger interface and realized they've tuned up the back office a lot, with many more options for how this thing looks.  Played around with it and spruced the place up a bit.

Actually, Blogger did such a good job that it's somewhat mitigating my desire to get my standalone blog up and running.  Will have to see.

As for the pics I had shot this last weekend for a couple of reasons.  First, for use in a compositing experiment.  Second, because it sports such cool (literally - really cold arena) architecture.  I had taken an iPad photo of it some time ago but it deserves better treatment.  So here's the community arena in quaint Oakbank, Manitoba... 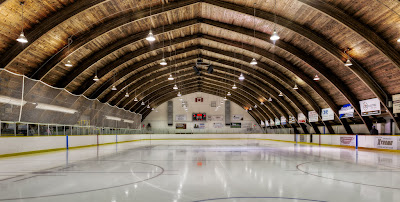 This is a high-dynamic range capture and is clearly heavily processed.  Hey, I'm not a photojournalist.  Who says I have to be bound by reality?

But I like the look, and it got me thinking (unfortunately late in the year) that this could make for an interesting collection: The Arena.  So during our next game I jammed my lens against the glass before anyone came out, while the ice was still freshly Zambonie'd, and produced this from the Stonewall Arena from a 5-shot bracket...

Doesn't have the flair of Oakbank, but has its own steely vibe going on.  So now with the twilight of the season upon me I think I'll need to make a concerted effort to grow this collection.