On the weekend I was inspired to shoot some long exposures destined for black and white.  Headed out to a nearby industrial field of gas tanks.  What I really want to do is get inside here as I have some specific ideas - will have to get in contact with them.  Unfortunately I was relegated to the outside so I made the most of it.

Also unfortunate was that I had a) too much light, and b) not enough wind.  My vision for these exposures was to have the heavy sweeping clouds moving through the frame.  Even stopped down to the max and with my trusty Lee Big Stopper shielding the light I was only able to get minute'ish exposures.  Not enough for those clouds to really move.

But they still looked fairly interesting, particularly when strong-armed with Silver Efex Pro 2 into high contrast black and white.  Ended up enjoying these quite a bit, even if they aren't what I imagined. 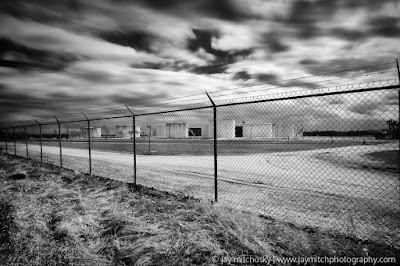 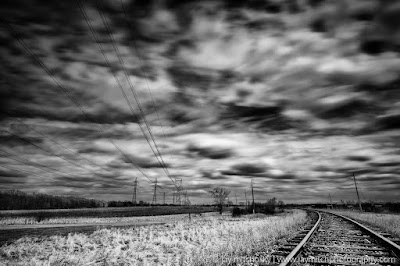 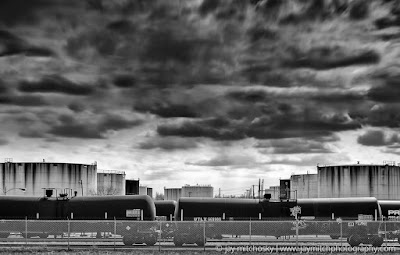 Email ThisBlogThis!Share to TwitterShare to FacebookShare to Pinterest
Labels: black and white, industrial

In the interest of getting some fresh air, moving my feet, and logging some camera time I took a brief walk around The Forks.  Great little section of the city with all sorts of things to shoot.  Was looking for details more than anything else.  Nothing exciting, but worth a lunch break.

First up some industrial space on Waterfront Drive.  Right next to this spot are new, modern condos.  That alone would have made for an interesting image and something I should revisit in the future.  Not sure how I'd frame it.  What is on display in a couple of these shots are some contrasts between the somewhat downtrodden facade of this industrial building wall and the artwork that adorns it. 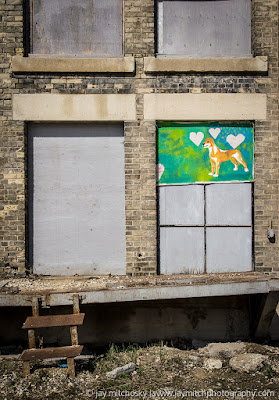 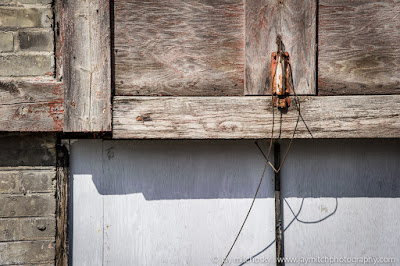 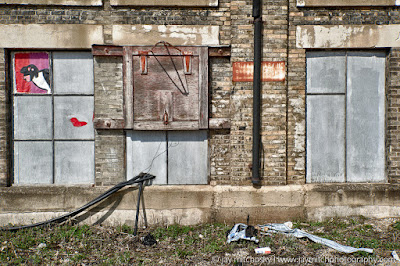 And moving from something falling apart, to something snazzy and unbelievably modern coming together: The Canadian Museum for Human Rights.  Over budget and behind scheduled it's a source of much controversy.  But WOW will it look amazing when it's done.  So many photographic opportunities.  I already have in mind long exposure work that can look amazing.  What caught my interest this time around wasn't so much the whole structure but rather the lines and contours of these details under construction.  I'll admit a major shortcoming of my photos is too much detail and not enough context - need to add that to the Skills Development List.  I guess the first step is admitting you have a problem. 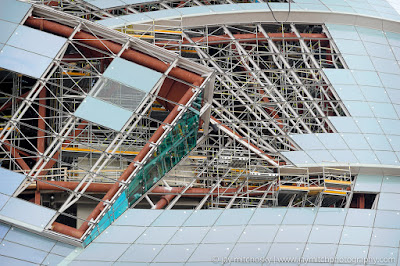 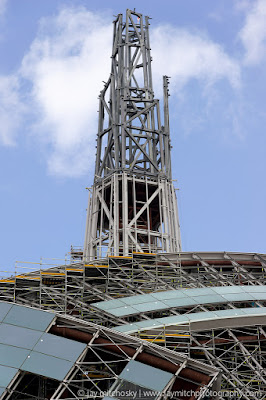 A little further in and the the brightly hued stucco of the Manitoba Theater for Young People (or "MTYP" as all the cool kids say) was an eyegrabber in the bright sun.  Shape, texture, and color.  That's it. 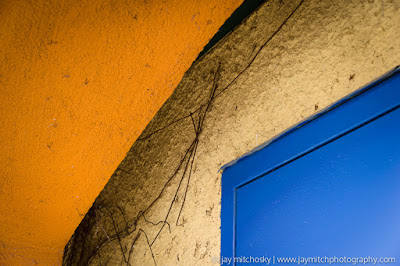 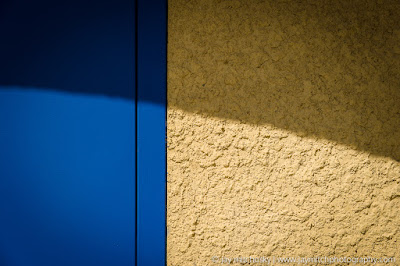 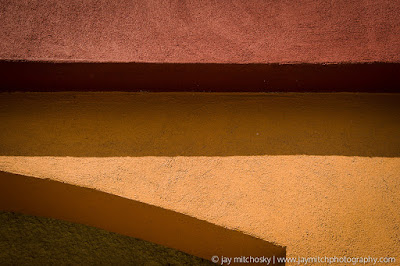 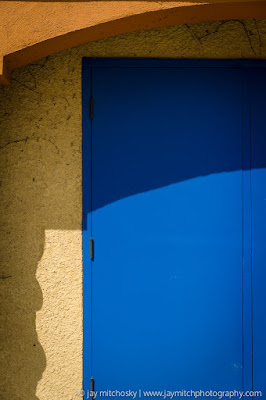 Some more bits and bobs from the area.  Look up, look down, look around. 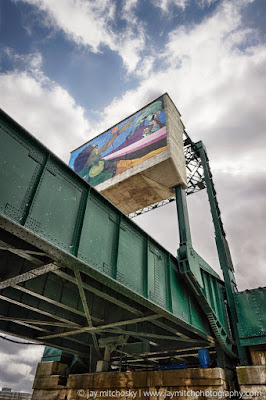 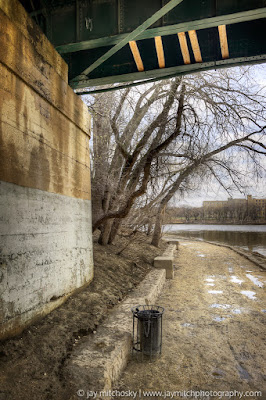 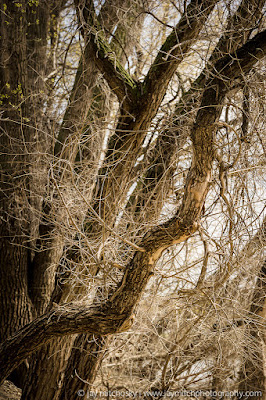 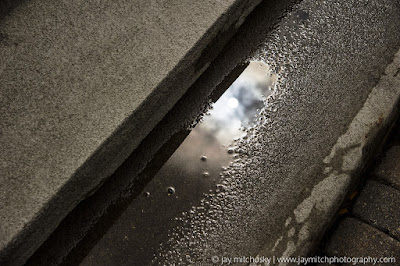 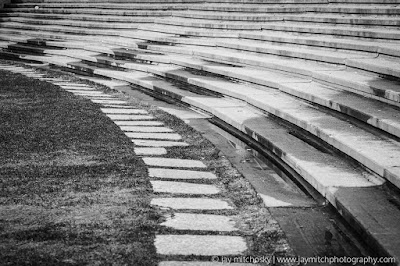 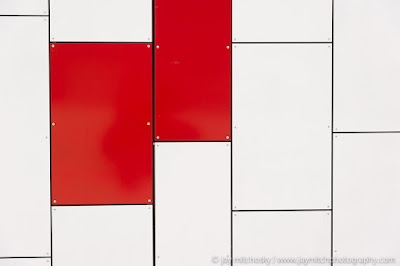 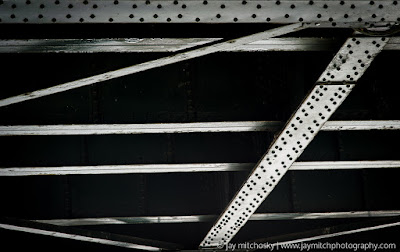 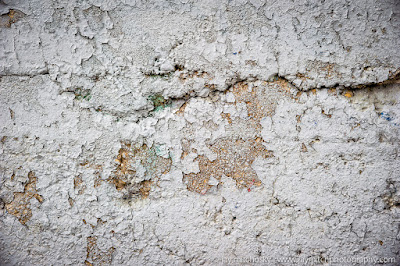 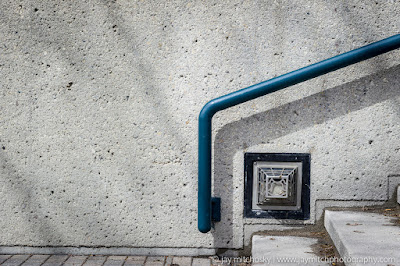 Finally, a quick run through The Forks Market to grab some chow on the go.  How cool is it to have an antique fruit truck indoors?  A Detail Hound could spend all sorts of time on this beauty. 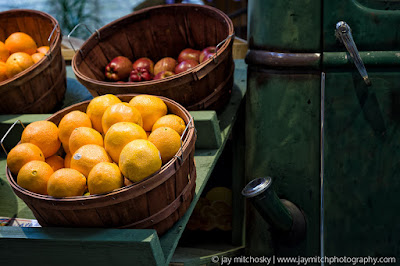 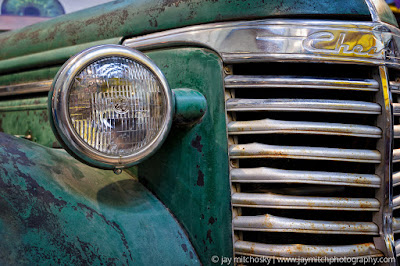 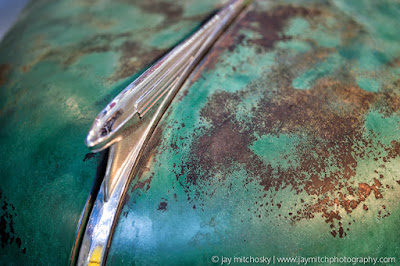 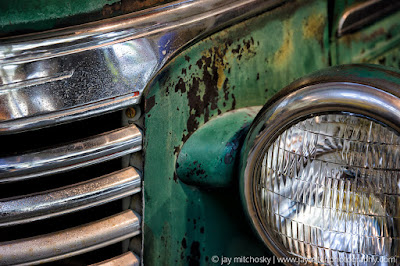 Always good to look, better to see.  Even for just a short while.
Posted by JayM at 1:01 PM 1 comment:

I never experienced the chemical darkroom.  The hassles, the chemicals, the waiting, the trial and error.  None of it appeals to me.  I'm sure those who slaved under the red lights and noxious fumes have a unique appreciation for today's digital darkroom.  The ease of revisiting and playing around with previous work is unparalleled.  Something that was fairly "meh" first time around can find new life.

Such is the case with today's entry.  Experimenting with some different approaches to black and white conversions with Silver Efex Pro and for whatever reason thought back to this image taken early last year at the Winnipeg Art Gallery.  I had originally posted about the unique geometry of the building here, but was never that satisfied with the image.

Here's Round 2 - an absolutely different interpretation but I like it much more.  The tones and textures that I'm toying with these days have a lot more density.  Something worth printing. 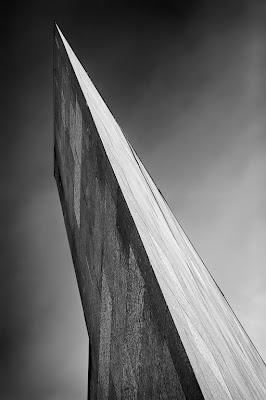 Or perhaps it's just a case of the tail WAG'ing the dog.  See what I did there?
Posted by JayM at 11:22 PM No comments:

To quote Col. Hannibal Smith from the A-Team: "I love it when a plan comes together."

At least after the fact.

Back to the vacation images and started reviewing the frames from our approach into Charlotte Amalie, the territorial capital of the US Virgin Islands located in St. Thomas.  There are a couple of islands nestled in St. Thomas Harbour, the closest of which I learned is Hassel Island.

As is easy to understand in retrospect, Hassel Island offered an ideal location for military fortifications back in the day ("the day" being 1802), guarding the harbour entrance against incoming marauders (the earliest "cruise ships").  To that end you can see the ruins along the southeastern shore resting in stark contrast to the luxury of our vessel, and the solitude of the Caribbean island town ahead.

If anything, the Caribbean is know for its color.  Beautiful blue skies, turquoise waters, with the countryside a (dare I say) verdant yellow and green.  Makes sense here in St. Thomas where apparently 9-months of the year it's officially "wet season."

And so it makes perfect sense for me to turn that on its head and go Hard Core Monochrome thusly...

The original, which I'm not posting, had all the color characteristics you would expect.  And while nice and inviting, that's not what I saw.  Consider the light, playing in and out of the clouds to the east.  This created a beautiful, albeit intermittent, spotlight effect on what I learned is Fort Willoughby, perched at the island's corner.  Likewise alternately casting the mountainsides in brightness and shadow ("chiaroscuro" if you want to get all fancy).  Then there is that Big Freaking Cloud, positively glowing but ominous at the same time.  Light, dark, ominisosity.  Not to mention the fact that we're looking at ruins here.

So while I did originally plan for a B&W image the surprise I alluded to in the title is not the processing decision but rather the intensity of it, and that it quickly became one of my favorite images I've ever developed.  Yay, me.  Tagged the crap out of it before sending it out into the world in hopes that it may see a life in stock agencies (submissions pending).
Posted by JayM at 11:02 PM No comments:

Bean There, Done That

In a change of pace from tackling the whack {technical term} of images from vacation, with inspiration fuelled by caffeine, I happened upon this scene with my iPhone this afternoon.  In need of some coffee I popped into my local haunt, and on my way out stopped and looked and shot.

Anyone who has an intense interest in photography will recognize the need to search out light, and be quick to point a lens in its direction when you come across it.  This of course becomes easier these days with phone cameras being much more useable.  With care, of course.  Their dynamic range is next to nothing and you need to pay extra attention to the highlights else they get blown to smithereens.

This article was linked in one of my online readers.  The author makes the following statement: "Once you become fully aware of the quality of light around you, you will become more curious with your camera."  This is absolutely true, and is what leads me to be interested in seemingly mundane scenarios like this: 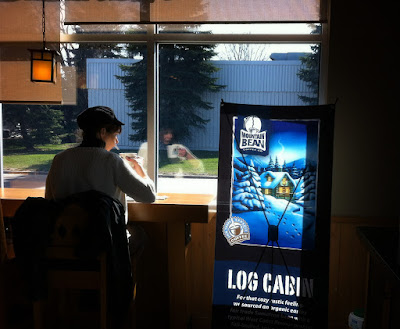 Simply a woman enjoying an afternoon coffee fix.  Nothing more, nothing less.

Except for the light.

It's burning through the window and backlighting the shop's ad banner, which is what first caught my eye.  It's bouncing up off the table and the cup and lighting her face.  Exposing for those highlights presents them in stark contrast to the surrounding shadows and with that some added drama.  The warm/cool color contrasts don't hurt either.   Ideally a better camera with a faster lens would have allowed me to blur out the distracting background across the street to better isolate the subject - not a chance with an iPhone.  Regardless, for me the light shows the comfort and warmth of the coffee house.

Or maybe it was just the caffeine sizzling through my veins.
Posted by JayM at 5:34 PM No comments:

The Hand of God

Last weekend we returned from a lengthy and much needed vacation at Universal Studios in Florida and an Eastern Caribbean cruise aboard the Royal Caribbean Freedom of the Seas.  Was a fabulous trip but still paying the price on two counts:

With more shots than I care to admit to pour through, catalogue, and develop the latter may be the most difficult but I hope to start posting some of my favorites over the next while.  To cap things off I'm going to start with this. 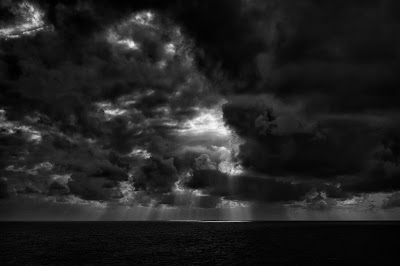 This type of show on the open seas was fairly common, with a degree of cloud cover allowing the setting (or rising) sun's rays to poke through and spotlight a small portion of the water.  I have many... MANY... of these with different framing and crops and spot size.  This may or may not be my favorite, but I had to start somewhere.

And while the skies look incredibly ominous and threatening here it is purely an aesthetic choice, one that I made at the time of shooting.  It was actually bright and warm and we had mostly smooth water the entire trip.  Which is good news as rough seas would have either made me hurl and/or spill my Margaritas.
Posted by JayM at 12:05 PM 1 comment: